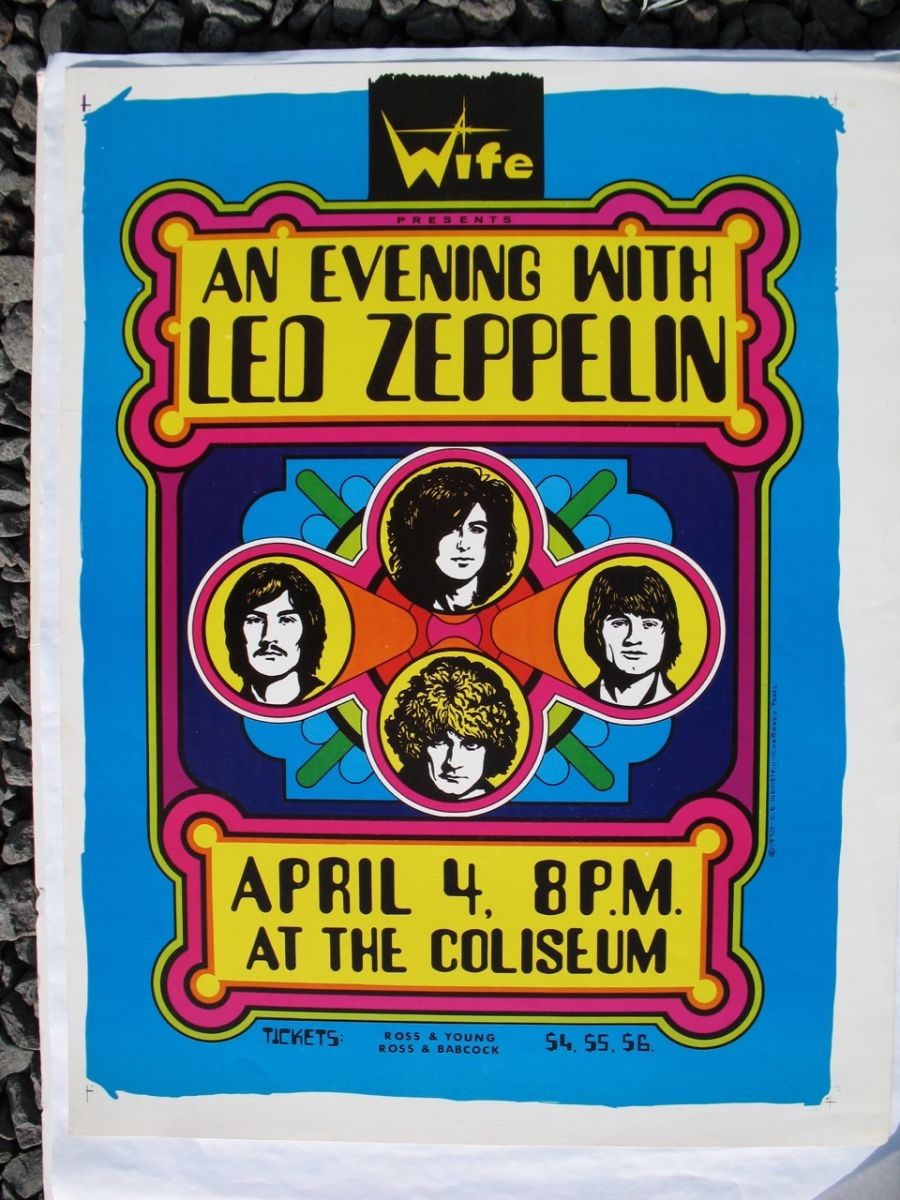 To become aquainted with Psychedelic Concert Poster Artiste' Extraordaire Catherine E. Weinstein's notorious & infamous biography, concert poster background & impact on the Pacific Northwest 1960's and 1970's psychedelic concert poster scene, one may wish to browse the following links, which also feature more of her incredible & innovative, concert poster artworks.  The links below contain most of the original Thunderbitch Exhibit Catalog, which was published in paperback form in 2010, as an exhibit catalog to augment the "Highly" successful  / well attended Thunderbitch Art Exhibit held at the Tether Gallery in Seattle, which also celebrated a plethora of other female concert poster designers in the Pacific Northwest from the 1960's through 2010.

The exhibit was titled "THUNDERBITCH" to honor Ms. Weinstein's psychedelic visionary, trail blazing & tumultuous life, since she used the name as her aka on many of her concert posters, the same name she had bestowed on her mid 1960's rally race car, and she had also painted "THUNDERBITCH" onto her race car helmet, previous to her entering the domain of prodigious Pacific Northwest late 60's psychedelic concert poster artists.


As you may, or may not, already know, Ms Weinstein's concert poster artwork for the Portland Memorial Coliseum show "An Evening with Led Zeppelin" on March 23, 1970, was also used for at least two additional venues, one hosted by radio station WIFE for Led Zeppelin's Indianapolis, Indiana concert on April 4, 1970 at The Coliseum (see full color photo at the top of this page), although I have yet to identify the third concert venue her Led Zeppelin poster artwork was utilized for.
lus shipping via Registered Insured Mail delivery (the set would need to be shipped flat, quality packed to insure current condition prote


http://www.thunderbitch.com/Thunderbitch_exhibit_catalog_Seattle_2010.pdf
lightly different format of the museum exhibit catalog
http://archive.today/uBVDe
~~~~~~~~~~~~~~~~~~~~~~~~~~~~~~~~~~~~~~~~~~~~~~~~~~~~~~~~~~~~~~~~~~~~~~~~~~~~~~~~~~~~~~~~~~~~~~~~~~~~~~~~~~~~~~~~~~~~~~~~~~~~~~~~~~~~
This UNIQUE & ONE-OF-A-KIND set of related LED ZEPPELIN items, which I acquired directly from Ms. Weinstein's archive & estate following her untimely demise in early 2003, an immaculate provenance, is currently available for $40,235.00 USD (this reduced price, down from $45K, will be good until the set is sold or until December 31, 2021) plus USPS Registered Priority Insured Mail delivery (VERY secure handling and tracking) and includes all of the items listed below:
LED ZEPPELIN - KISN presents"An Evening with LED ZEPPELIN" - March, 1970 at Memorial Coliseum in Portland, Oregon - Original Artwork by the late, great, Catherine E. Weinstein - Hand applied black ink on frosted mylar sheet, features the completed poster artwork which would function as the black line for the final concert poster printing process - 16 31/32" x 22 1/2" - Features the completed high contrast illustrations of the faces of the four Led Zeppelin musicians arranged symmetrically inside a mandala shape in the middle of the poster with "An Evening with Led Zeppelin" lettering above and the venue info below, along with the ticket out info (see photo below) - This sheet also features Ms Weinstein's artist credit, hand signed in black ink along the lower right margin, with "Corberry Press" listed alongside her name (at least both the Portland concert poster, and the Indianapolis poster were printed at this famed Portland print shop owned by Mr. Corberry, who literally wore out his presses printing multiple color concert posters by Bruce Weber, Catherine Weinstein, Dorc, Jim Blashfield, and other local Portland concert poster artists who created Springer's, Beaver Hall, Charix and other Portland venue posters) - Ms. Weinstein's hand signed posters are incredibly scarce, since she had not participated in signing sessions typical of the S.F. Bay Area artists, etc. - SEE PHOTO BELOW - More photos available on request to potential buyer(s).
A NOTE ABOUT ORIGINAL ARTWORK CREATED ON MYLAR:
Mylar sheets preserve hand applied ink artwork far longer than the same inked artwork would survive on paper or board stock (Source:  GORDON MCCLELLAND, author of the first RICK GRIFFIN book, printer and Rick's former partner in the early 1970's at California Graphix Exchange. 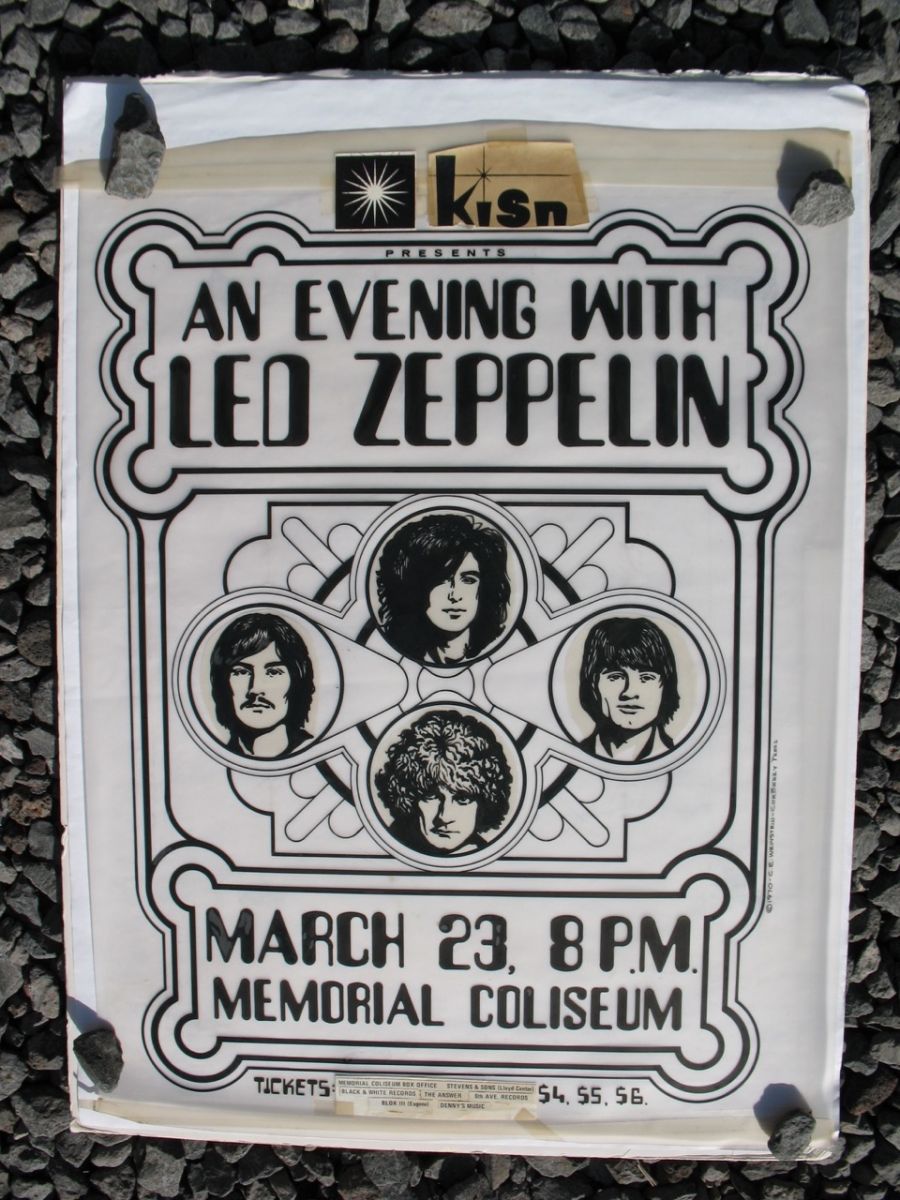 **Also included are another seven (7) hand applied black ink on 17" x 21 7/8" frosted mylar sheet overlays / color separation sheets (if you are potentially interested in purchasing this set, I will e-mail the plethora of photos of these sheets your way), hand inked by Ms. Weinstein which allowed for the use of very intense / vivid and vibrant colors on the final version of the poster for the various venues which utilized her Led Zeppelin concert poster artwork  - I will e-mail a series of photos your way if you are potentially interested in purchasing this set, so you can get a clear idea of the amount of her hand inked artwork on each sheet.
**WIFE Presents "An Evening with LED ZEPPELIN" in Indianapolis Indiana - April 4, 1970 - First / Only Printing Concert Poster Uncut Artist's / Printer's Proof Sheet - Uncut, finished Printer's Proof sheet  / Artist's Proof Sheet - 16" 31/32" x 22 1/64" - Actual printed color poster area is 15 5/16" x 20 5/16", from the printer's registration hasch mark (one at each corner, printed faintly in black ink) to printer's registration hasch mark, etc. - Artwork by the late Catherine E. Weinstein (RIP in February of 2003, exactly on her 60th birthday), one of the top seven (7) Pacific Northwest Concert Poster artists of the 60s and 70s and a technical artist for her entire career - Minor blemishes, a few extremely mild & light handling bends can be seen from the right angle, under sufficient light (I can forward closeup photos if you are potentially interested in purchasing this unique set) will describe in detail if interested - Only copy of this poster I've seen or heard of thus far, this item was among the artist's portfolio of items surviving the artist as part of her estate, which I acquired from her estate executor in 2003, her soul mate for the last few decades of her life, Blackwell Arendale - One of the many Led Zeppelin collectors I've communicated with over the past 14 year or so claimed that there is a Zep collector that owns a copy of this concert poster (not an Uncut proof sheet), although I have not been able to confirm this assertion thus far - Most likely a ONE-OF-A-KIND, fully completed concert poster artist's / printer's proof sheet for this concert date! - Ultra Mega Rare - Pristine A- / B+ to B+ condition - SEEE FULL COLOR PHOTO of the concert poster proof sheet near the top of this page.  I will forward closeup photos of the poster if you are potentially interested in purchasing this set. - To get a simulation of the potential value of this uncut poster sheet along, it's worth noting that seldom seen, ultra mega rare LED ZEPPELIN concert posters have been fetching between 12k to 18.5k (including 10% buyer's / premium fees) in recent auctions in 2018 & 2019.
**One (1) approximately 10 1/4" x 9 9/16" (not evenly cut, see photo) frosted mylar sheet featuring Ms Weinstein's hand applied black ink artwork of the faces of the four Led Zeppelin musicians which was used as a preliminary ink study to transfer over to the final version of the original artwork (see scan, below): 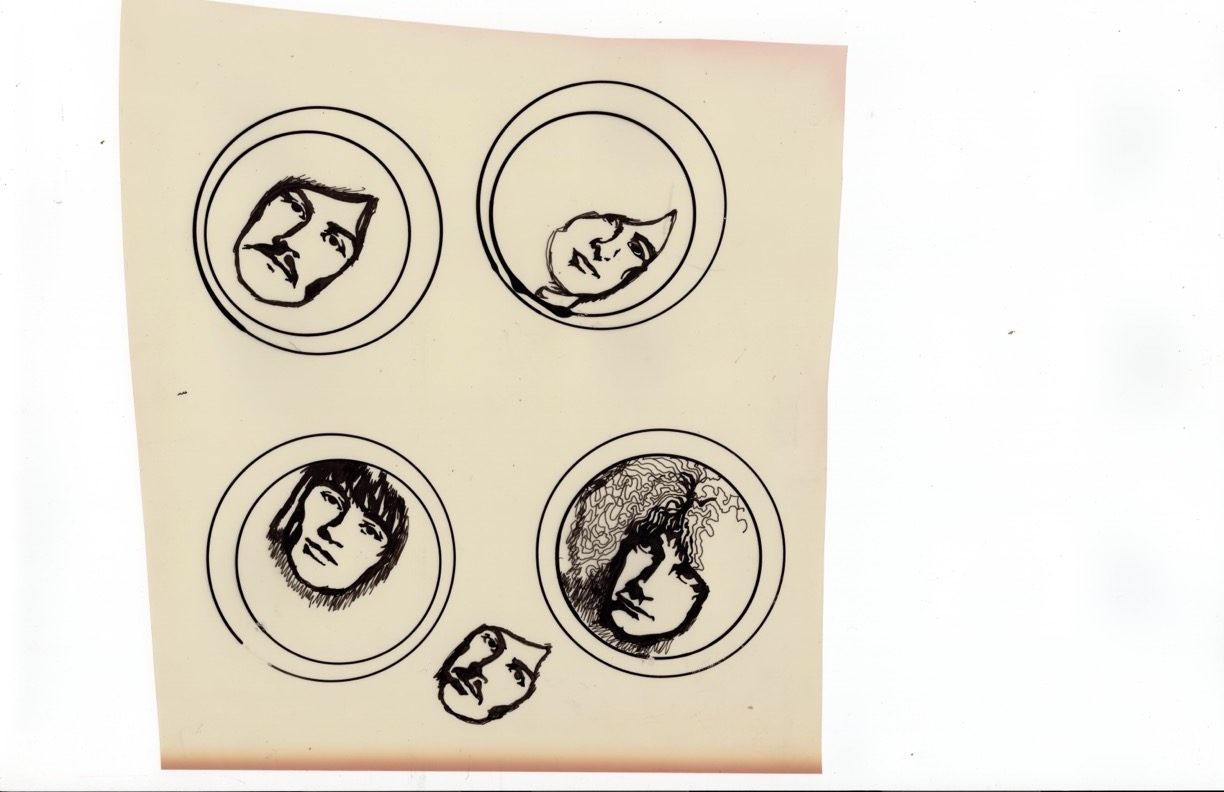 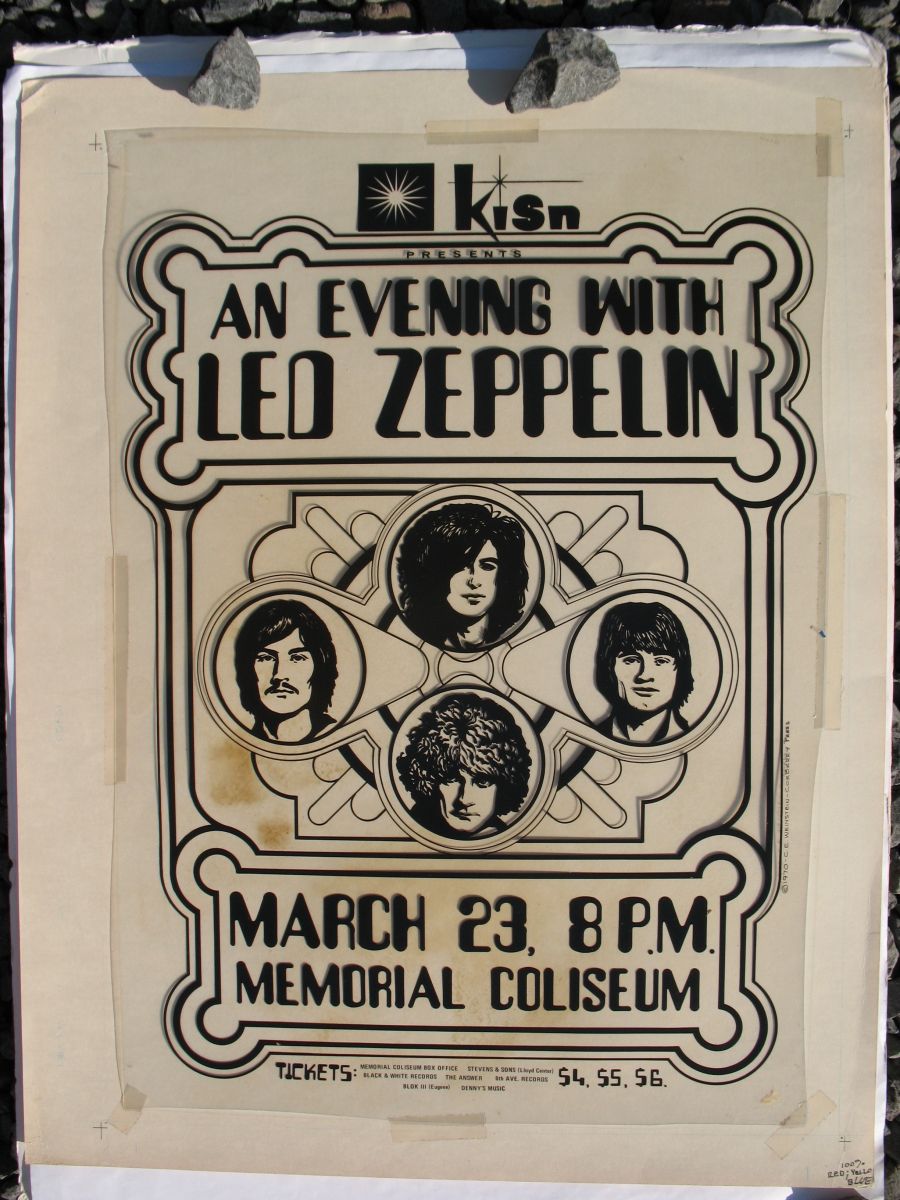 This blackline printer's positive film sheet was mounted, by Catherine, with tape on the blank back side of one of her very popular "Hippy Hippo" Portland Zoo Springer's Ballroom ultra scarce "blue color only" printer's / artist's proof sheets.  The film contains no original inkwork, and was used by Corberry Press in Portland to print the final concert poster from.  Sometimes these plastic sheets are referred to as Printmaker's Film, Platemaker's Film or Printing Film.  They are a ONE-OF-A-KIND culmination produced directly from the artist's completed artwork, as you most likely are already aware.

The following definition, extracted from an auction run by Jim Northrup of Sixtiesposters.com, may prove informative regarding the role of the printer's film in producing a concert poster back in that era:

"The printing film was placed on a chemically covered plate, and the image was "burned" to the plate with a bright flash of light.  This created the plate image that printed the posters."

Value of printing plates and printing films vary widely, depending on how attractive the groups, artwork, age, and venues to potential buyers who appear to bid in that particular auction, etc..   A Youngbloods Wes Wilson BG-24 Fillmore printing plate brought over 4k in an auction several years ago, although that is the highest price for a plate I've seen thus far.

**KISN PRESENTS AN EVENING WITH LED ZEPPELIN - March 23, 1970 at the Memorial Coliseum in Portland, Oregon - First / Only Printing Concert Handbill - 6 1/16" x 8 1/2" - Red offset printing on goldenrod paper - Artwork by the late, great Catherine E. Weinstein (aka "Thunderbitch, see thunderbitch.com for a bio of her tumultuous life as a seminal female sixties poster artist in the Pacific Northwest) features four drawn faces of the four members of Led Zeppelin at the center, with hand wrought lettering style above and below, surrounded by a creative border - The same concert poster artwork was used for the concert posters in at least three cities along the tour route in 1970 - 5/8" bend at upper left corner in the margin area, extremely light (difficult to spot) faint hint of a 1 3/8" bend at the lower right corner in the margin area only (very difficult to spot), very light mild 1 1/4" bend at lower left corner in the margin area only, along with a few smaller corner bends below it, barely seen arcing, light stain in the margin at the center of the left side - I've seen six (6) copies in the 9+ years I searched extensively for concert posters and handbills in the Portland area, as well as during the past 20 years of monitoring a plethora of concert poster auctions! - This copy came directly from Ms. Weinstein's archive following her demise in early 2003 - (See scan of front side of the handbill below, back side scan available on request) 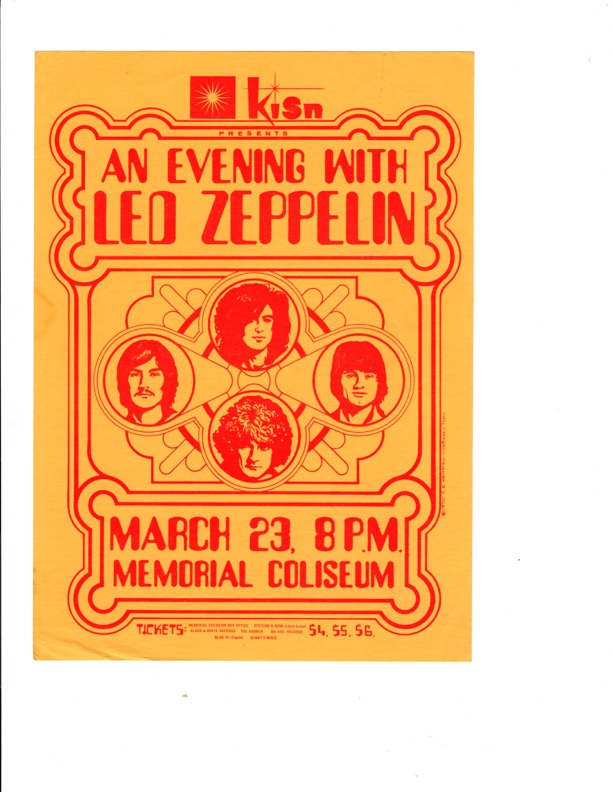 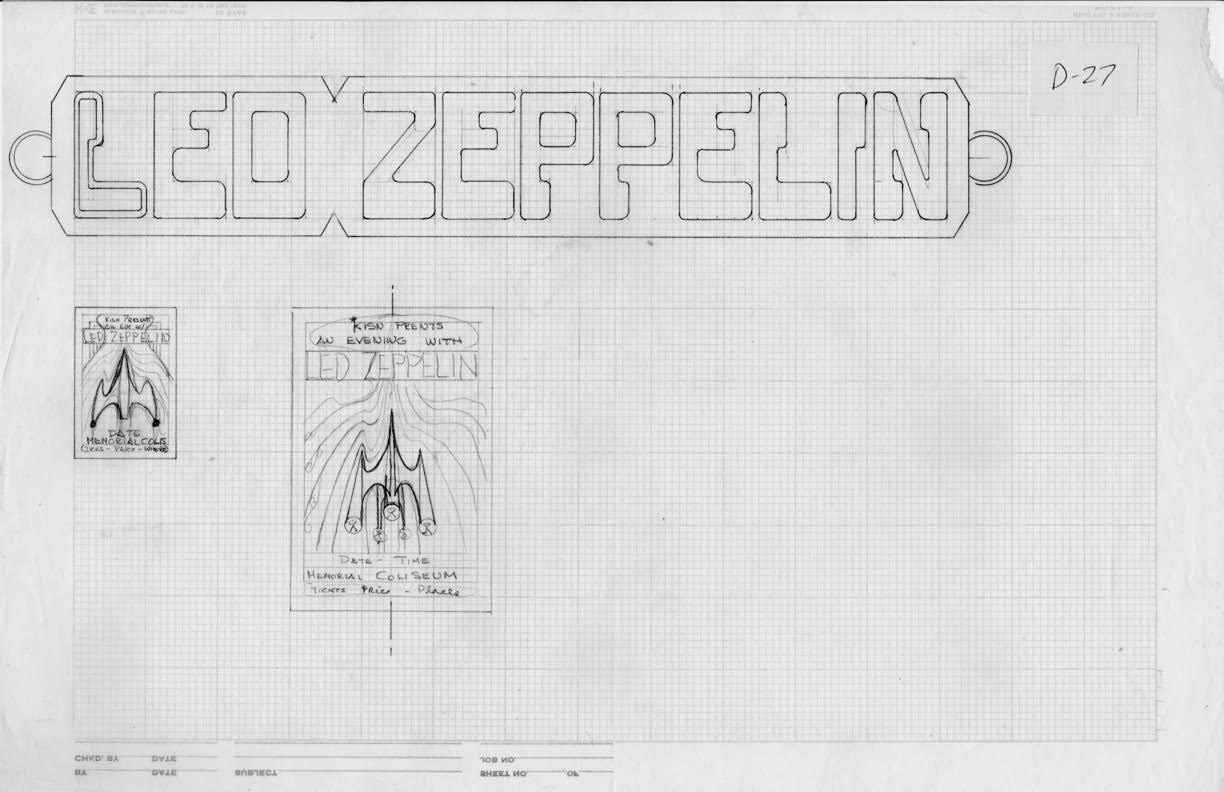 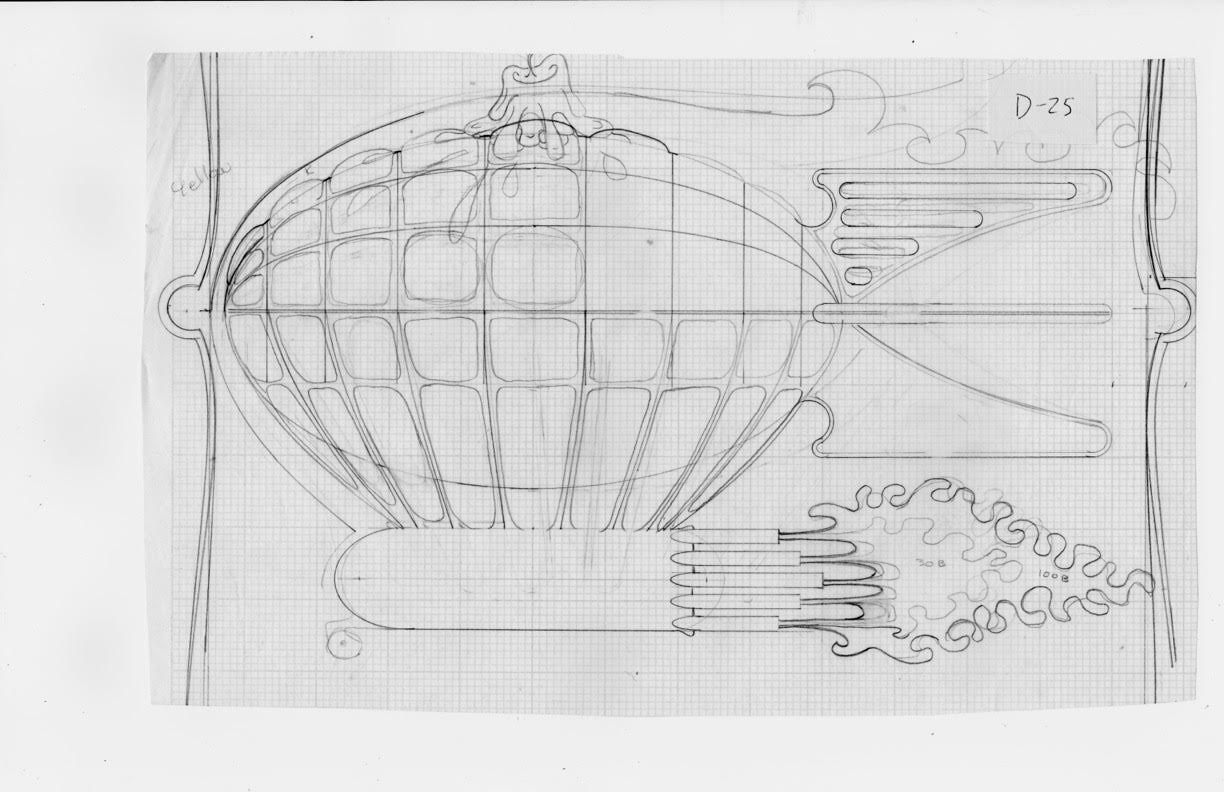 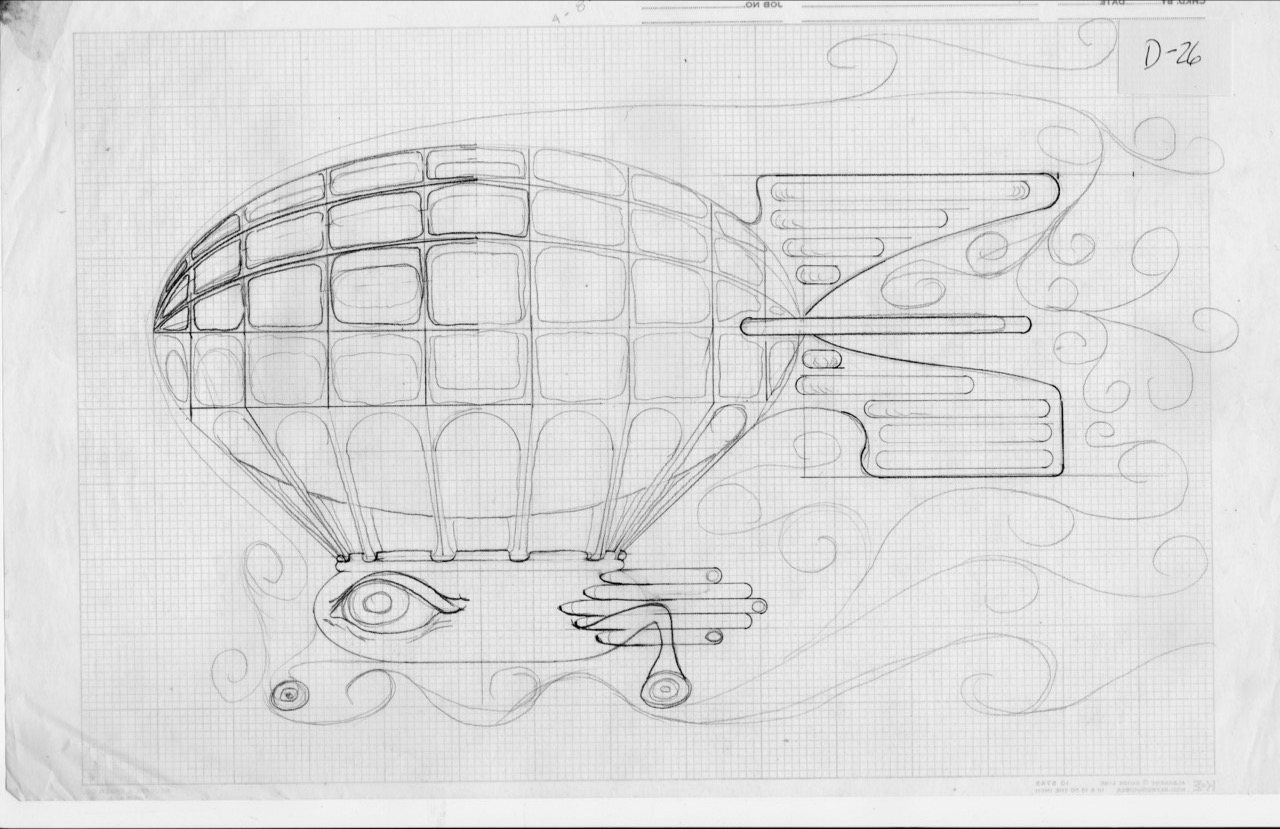 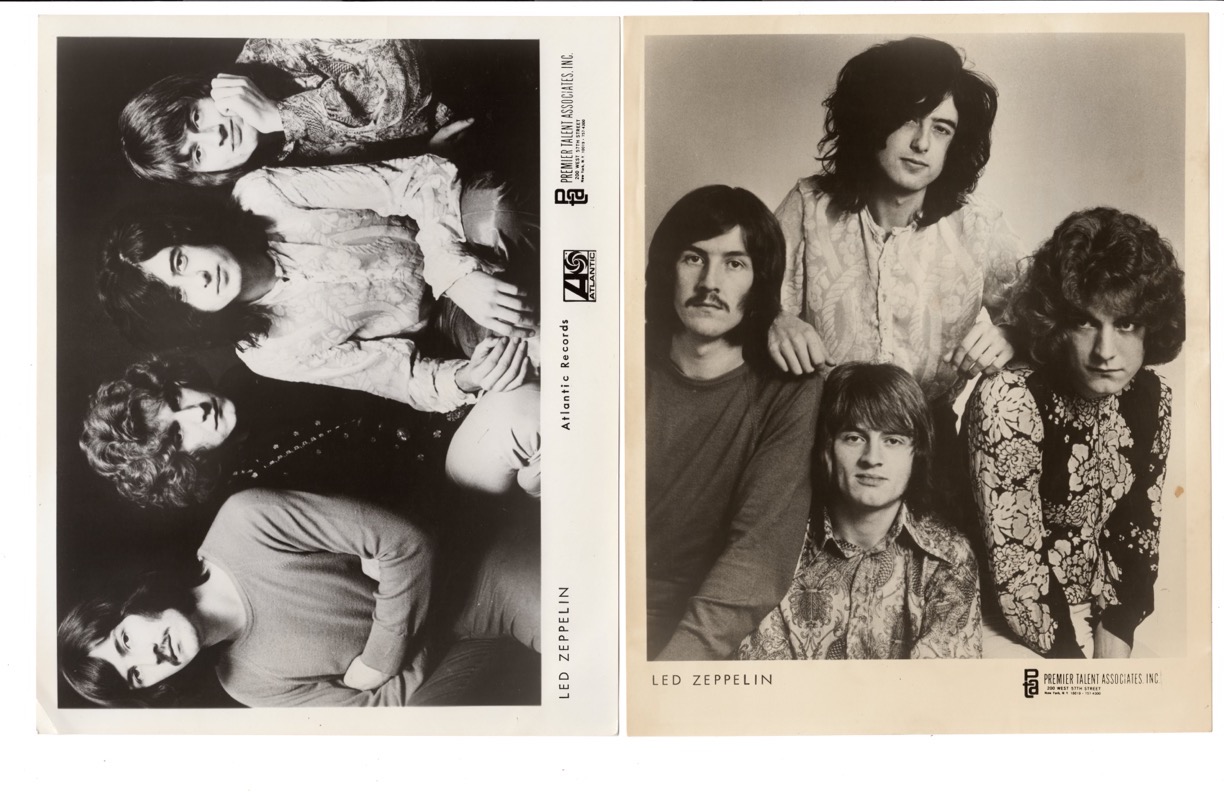 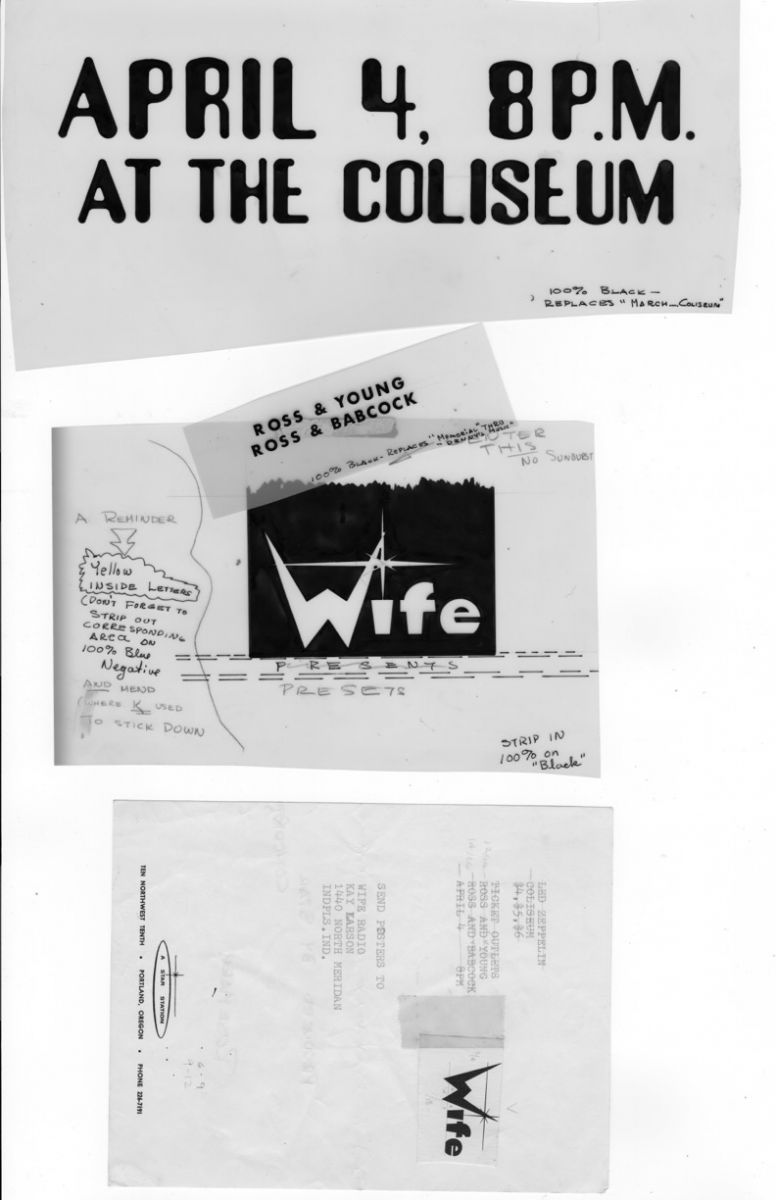 *****Since I also purchased the artist's copyright / reproduction rights & authorizations for this poster artwork from Ms. Weinstein's estate in 2003, it is also included with the set, as an added bonus.   If one wanted to reprint either the Portland, Oregon version of her Led Zeppelin poster or the Indianapolis, IA version as a limited serigraph / silkscreen print or poster, T-Shirts, and other commercial applications, one would still have to satisfy the requirements of LED ZEPPELIN'S commercial management, since I do not own their approval for reprint projects.

* Add $22.00 to $27.00 for shipping on an order of poster(s) (with or without handbills) for Priority Mail / Insurance / Strong tube / quality protective care packing / post office mailing / etc. - Call for a Priority Mail quote for your location.

* Add $25.00 to $35.00 for UPS Blue / 2nd Day delivery (Quicker, more predictable these days!) - Call for UPS Shipping Charges, which are changing due to shifting fuel surcharges.

* Foreign Orders, Alaska and Hawaii - Please call for a shipping quote / rate to your location.

PRICES BEING REVISED - INQUIRE FOR DETAILS ON SPECIFIC ITEMS

Send a money order or cashier's check (faster) or check to: