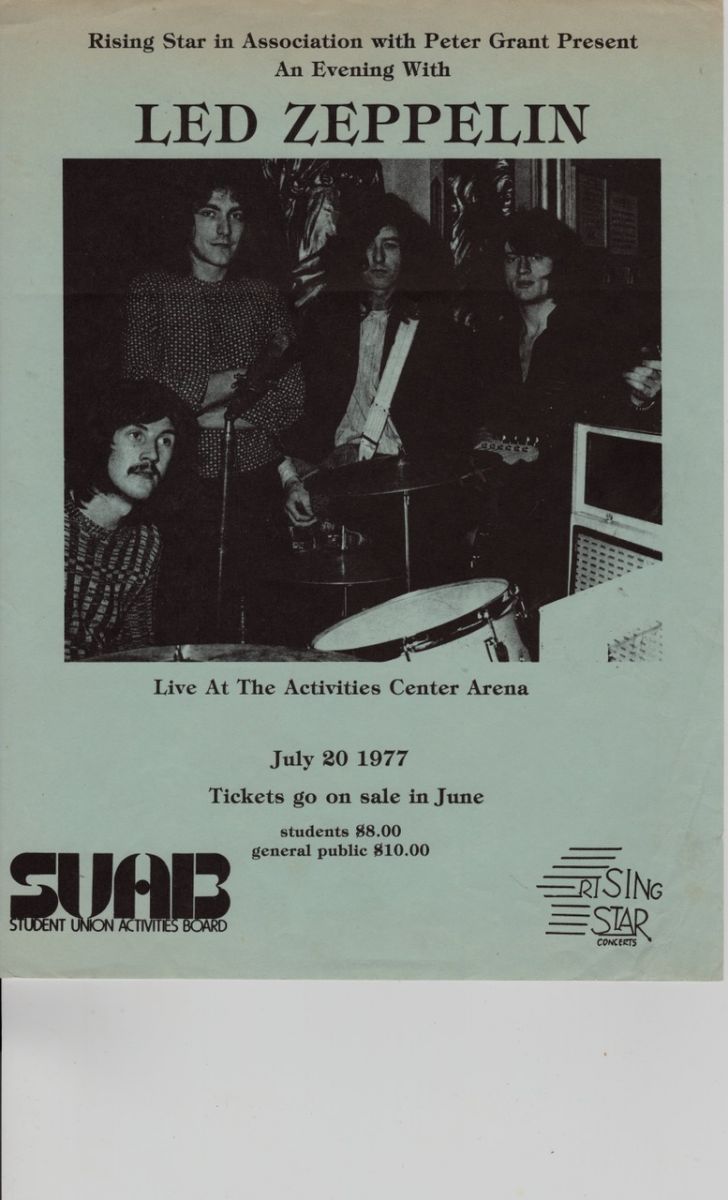 LED ZEPPELIN - July 20, 1977 at The Activities Center Arena in Tempe Arizona (presented by the Student Union Activities Board / Rising Star Concerts in association with Peter Grant - First Printing Concert Handbill - 8  1/2" x 11 1/2" - Black offset printing on light blue paper handbill features large photo of Zeppelin in small room with instruments, Bonham in front with his drums - Some long bends along the right margin, only in the border area, light toning / aging in the paper along the top edge, along with micro top edge wear which is difficult to see except when looking very closely, extremely light vestige (hint) of a horizontal bend (likely easily ironed out) gently across the photo area (seen when looking closely) - Great copy overall (unfaded, photo area very clean--quite frameable as is) - I acquired this handbill directly from the Psychedelic Solution Gallery in 1996 - Ultra Mega Rare - Beautiful B/B+ to B+ condition -1.5k plus Registered Priority Insured Mail delivery costs.

LED ZEPPELIN "The Immigrant" December 30, 1970 - 93 / KHJ BOSS 30 listing from Los Angeles radio station features black and white photo of Zeppelin atop the top 30 listing (The Immigrant Song was #7 that week and had been on the charts for 11 weeks - First / Only Printing Radio Survey - 3 1/4" x 12 1/16" - This Led Zeppelin photo is obviously taken fom the Atlantic promotional poster with Bonham at left, Plant at right etc. - This particular Radio Survey was never folded at the center for distribution in record stores, etc., so it is mega scarcer than the foled and distributed version - A 47 year old Zeppelin "artifact" - Ultra Mega Rare (especially in this unfolded condition) - Pristine A- / B+ to A- condition - 200.00

LED ZEPPELIN - First Printing ca. 1992 Serigraph / Silkscreen Print - 36" x 25 1/8" - Silkscreen edition published in the early 90's by Art Rock features Randy Tuten artwork from BG 199 (See ART OF THE FILLMORE and ART OF ROCK) in the Bill Graham Presents / Fillmore Auditorium / Winterland concert poster series for their WINTERLAND concert on November 6, 1969 - Hand signed and numbered by the artist, R. Tuten - Produced on very high quality stock in brilliant silkscreen colors! - A / A- shape - Inquire for availability - Current Price (The following image link is posted to remind the viewer of the concert poster artwork and IS NOT a photo of this Serigraph:

"I, Randy Tuten, hereby attest that the silkscreen I have transferred ownership of to David Faggioli is the only printing proof printed with exactly the same colors and was printed prior to the signed / numbered edition of 1,000 copies vended by Art Rock Gallery and later transferred to Wolfgang's Vault, originally produced in the early 1990's."
I had a restoration tech remove some splashes of ink etc. from this unique silkscreen print several years ago - Inquire for Availability / Current Price & Digital Photos 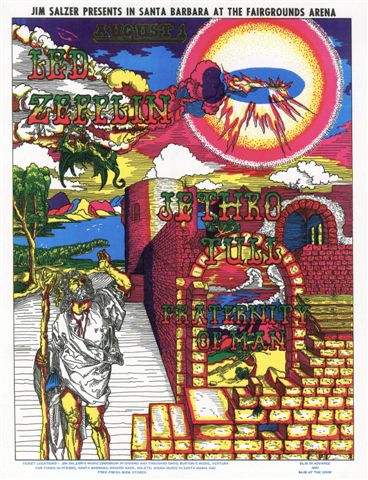 PLEASE NOTE:  The full color image posted here is NOT the hand signed 2nd printing poster I have for sale currently.  I will forward digital closeup photos of both sides of the promoter published 2nd printing  concert poster if you are considering purchasing the poster.

LED ZEPPELIN SPECIAL - "WILL THE SONG REMAIN THE SAME?" - SPECIAL COLLECTORS EDITION - Published in 1981 by Modern Day Periodicals, NY - First/Only Printing Magazine - 8 1/8" x 10 27/32" - 66 pages plus 4 pages of the front & back covers - Interior black and white pages printed on newsprint - Full color front cover features stage photos of Jimmy Page, John Bonham and Robert Plant - Inside front and inside back cover features full color photo of Robert Plant on each, while back cover features a photo of both Jimmy Page & Robert Plant in the midst of a tune on stage with John Bonham (?) playing drums in the back ground (his face is not visible, could be a later drummer) with the title "LedZep" in red lettering at upper left corner of the photo and "11-6" in black marker across Jimmy Page's chest (a date code for magazine distribution) - Interior pages features a plethora of black and white photos of the group along with articles / text as well as a special centerfold section of eight (8) pages of full color "posters" / photos of the band members past & present, which includes four separate photo posters of John Bonham by himself, one of Robert Plant, one of Jimmy Page playing guitar on stage and the actual centerfold, which is a double page spread photo of the band members in 1972, standing in front of their limo during the day - A few minor handling bends and dings - Scarce - Pristine B+ condition - Inquire for Availability / Current Price

LED ZEPPELIN - "COMMEMORATING...THE INDUCTION INTO THE ROCK & ROLL HALL OF FAME    LED ZEPPELIN" - Thursday, Jan 12th, 1995 at The WALDORF-ASTORIA GRAND BALLROOM in NEW YORK CITY - First Printing Globe Poster Corp. Window Card Poster - 22 9/64" x 33 3/32" - Printed on gray window card stock - Features 5 7/8" x 9" horizontal photo of all four musicians posed crowded together, looking at the camera (mostt likely a promo photo from Led Zeppelin's lat 60's tour period) printed just below the balck announcement block printing above, with "LED ZEPPELIN" in even larger, bold black, block typeset lettering below, along with four of their hit tune titles around the photo, also in black typset lettering, "Stairway to Heaven", "Whole Lotta Love", "Kashmir" and "Rock and Roll", with split fountain colors in the background, grading from orange at the top area, down to yellow, then to green, and blue at the bottom edge where the venue info is printed - "The Globe Poster Corp. Baltimore, MD" credit is printed in black typeset lettering alont the bottom edge of the poster along with their company logo and phone number at that time - I purchased this poster directly from Globe Poster Corp. in 2002, when it was the only copy they still had available for sale - I'd hazard to guess they only printed 250 to 500 copies of this poster, since window card stock is fairly expensive, as is full color printing - I have not found another copy of this poster for sale anywhere on the web in recent extensive searches on google, although I do recall seeing it listed in ARTROCK's color catalog in 1995 or so - Since it was printed with a silkscreen type printing process, the ink is not solid in places, typical of organic printing on board / card stock of this size, which is observbable in some of the closeup photos I took of it recently - I will forward the photos if one becomes potentially interested in acquiring the poster (I will eventually post a photo on this page) - The poster has a few corner bends, at the lower right corner and upper left corner, along with minor dings & blemishes here and there (although they do not detract from the impact of the poster imagery / body of the poster, so it will look great in a frame or poster book as is! - Scarce these days - Beautiful B+ condition - 325.00 plus shipping (Due to the dimensions of the poster, as well as the window card stock, I will need to use a wide diameter, thick walled, heavy duty mailing tube to protect it's current condition in transit to any US location)

ROBERT PLANT - PRINCIPLE OF MOMENTS - 1983 TOUR BOOK - First/Only Printing Tour Book - 11 63/64" x 11 63/64" - 24 pages, featuring full color and black & white photos printed on white, thick, quality stock - General light wear, handling bends, a few stray marks, bottom center edge have some "warping due to being in a moist atmosphere at one point (only in the white margin area at the bottom of the pages) - Beautiful B/B+ to B+ condition - 20.00

* Add $22.00 to $27.00 for shipping on an order of poster(s) (with or without handbills) for Priority Mail / Insurance / Strong tube / quality protective care packing / post office mailing / etc. - Call for a Priority Mail quote for your location.

* Add $25.00 to $35.00 for UPS Blue / 2nd Day delivery (Quicker, more predictable these days!) - Call for UPS Shipping Charges, which are changing due to shifting fuel surcharges.

* Foreign Orders, Alaska and Hawaii - Please call for a shipping quote / rate to your location.

PRICES BEING REVISED - INQUIRE FOR DETAILS ON SPECIFIC ITEMS

Send a money order or cashier's check (faster) or check to: